Gene Thompson (they/them) is a multimedia sculptor and performance artist from Pittsburgh, PA who addresses themes of articulating trans identities, gender fluidity, and liberation from patriarchal consumerist society. They use wearable soft sculpture performed with dance and movement to uncover unseen narratives, explore themes of closeness and isolation, and investigate socially confining factors such as the gender binary, class, and race.

As a queer, non-binary person who is a survior of sexual violence, Thompson is invested in using their work to make safer spaces. They use a unique visual language to talk about isolation, blurred sense of identity, and dysphoria. They use public art to disrupt expectations and isolating barriers, building inclusive performance events that connect people who do not see themselves represented in the media.

The wearables in their work are membranes that connect people. Thompson invites the audience to relate directly to one another. A vibrant color palette seeks to bring brightness, hope and perseverance to people’s minds. The large blocks of color that cover the performers open a conversation about the space that we need to create for one another in order to be seen.

Thompson’s work addresses the intimate spaces of performers. They use the activation of fabric as a vital tool in performance, both demarcating the proximity of bodies in space, and also covering identifying qualities of the performer. Using live facilitation, Thompson hopes to bring the audience into a place that is playful and liberated, providing them a refreshing experience of authenticity in occupying space, and allowing them to shed habitual social barriers.

Thompson has been performing and touring their wearable work nationally since 2013. They also have a strong foundation as a printmaker and an artist educator, developing and leading workshops that serve as a conduit for social emotional learning, connect people across a diverse range of ages and communities.

Aware of the resiliency that community centered practices build, Thompson is extremely interested in collaborating with “third spaces”; public spaces that do not require monetary exchanges. Thompson believes creating accessible space and facilitated public programming for people to connect has the potential to reshape individuals and collective experiences of community. 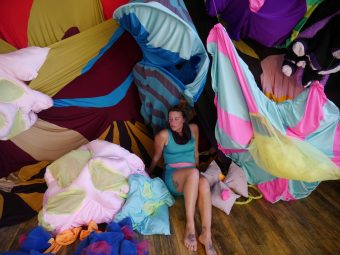